As a year round commuting cyclist, poor winter maintenance of  bike parking locations is something I should probably be annoyed about. It’s true that a lot of businesses seem to regard the bike rack as the logical place to dump the snow they shovel from walkways. After all, nobody cycles in winter. If they do, they’re probably crazy enough that you don’t want them wandering into your retail establishment.

In practice, it doesn’t usually bother me. There actually are less cyclists competing for rack space in the winter so I can usually manage to find a spot.

There should be no expectation of finding statistical significance in the contents of this blog post. My sample size is a whopping four parking locations that correspond to the times that I actually had my camera with me and I remembered to take a photo. 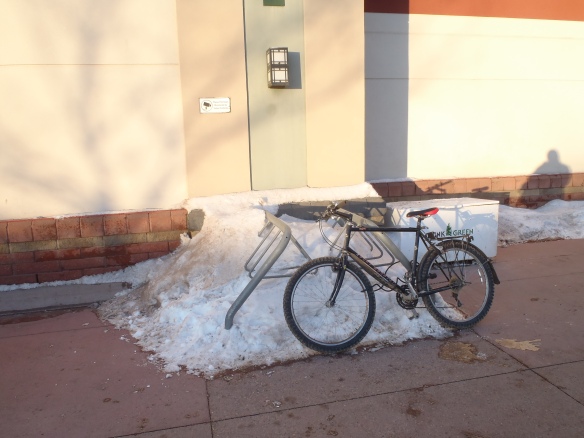 Save-On Foods (112 Ave and 82 St.) This is a hilariously perfect example. A completely snow free walkway and a buried rack. It actually hasn’t been a problem, as there is enough room for two bikes at the rack, and I’ve never seen even one other. 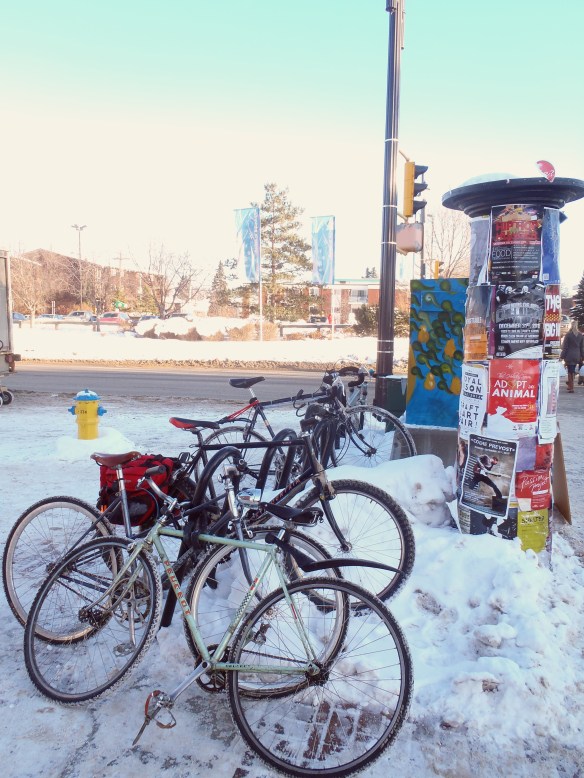 Strathcona Farmer’s Market. This one is a bit disappointing. I expect better of Farmer’s Market. Even in the winter there are usually a number of bikes parked outside (such as the nifty Peugeot and Kuwahara seen here in the front). They should do a better job of keeping this rack free of snow. 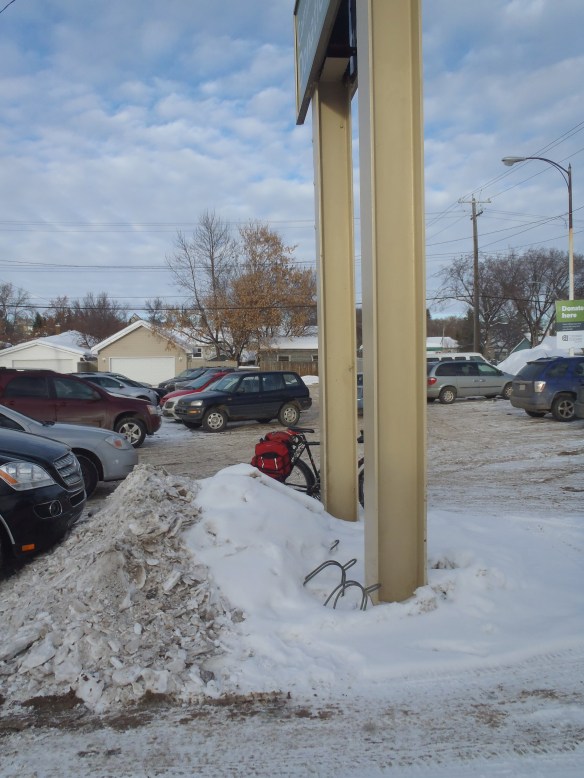 Value Village (Whyte Ave location). This one is pretty bad. The rack is one of the low ones and it’s been covered almost completely. I locked my bike to the pole. On the other hand, at least they have a rack, unlike the northside location. 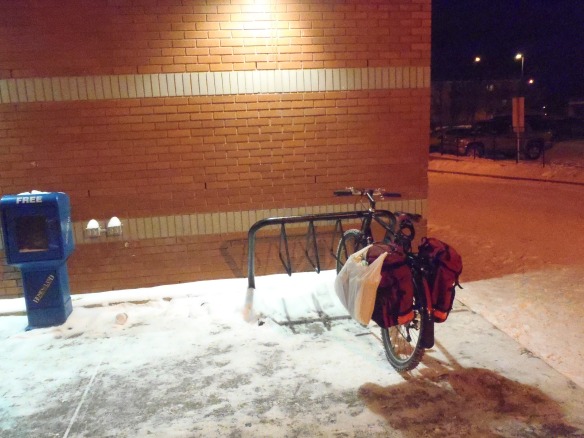 Safeway (118th Ave & 82 St.) My local grocery store is the surprise winner in my small survey. The bike rack is always free of snow and has the bonus of being well lit and close to the doors. Congrats Safeway! You get the Tuckamoredew Bike Parking Seal of Approval.

In another epoch, I used to receive cool things in the mail on a semi-regular basis: magazine or comic subscriptions, letters from friends and relatives, mail order catalogues, etc. Sadly, as time passes more and more of this has moved online. Even unpleasant mail such as bills mostly routes itself to me through the shiny plumbing of the internet. The electronic convenience is nice, of course, but it is still particularly fun to receive an actual physical object that has traveled a distance replete with stamps and postal marks.

Earlier this week I received an envelope from Portland’s wool mantled, retro-grouch blogger Shawn Granton of Urban Adventure League.  Back in December he  ran a giveaway contest on his blog and I was the lucky winner of two zines and three buttons.

A nice selection of stamps. Any reader of my blog will see the suitability of the cycling stamps, the bridge and the the grasslands. The lamp is eerie, though, as I don’t see how anyone would know that I considered learning stained glass making a few years ago. Could Shawn be a PSYCHIC retro-grouch? 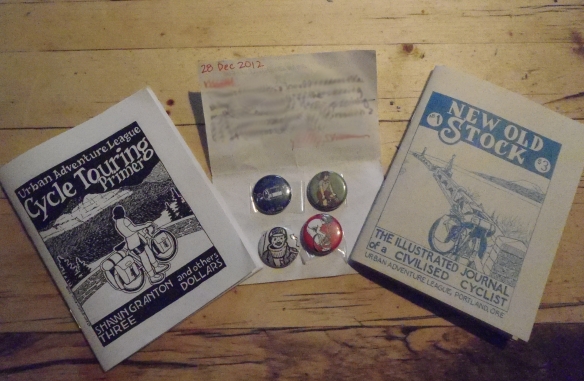 The New Old Stock is a collection of his comix illustrating the life of a civilized cyclist. There’s lots of good stuff here, including nifty bike illustrations and non-pretentious commentary on bike culture from America’s cycling mecca, Portland. This is one of my favourites. Check his blog for more.

He’s also an accomplished at bicycle touring. This is how I first became aware of his blog, as he stopped here in Edmonton during his Cross Continental bike tour in 2011. The Cycling Touring Primer is a nicely condensed introduction for the novice bike tourist. It’s full of good advice and reading it increased my frustration at not getting my act together and hitting the road myself. After all, that’s why I bought the ’83 Nishiki Continental two years ago.

From the selection of buttons at his store I chose two mechanically themed ones (’cause I like wrenching bikes) and one of a woman cycling (’cause I’m  a sucker for a dame on a classy bike). He also added a fourth button that I eventually realized is a detail from his illustration of himself in winter cycling garb (Portland style, that is. Edmonton requires sterner measures). I appreciate that one as I am in full winter cycling mode at this time. 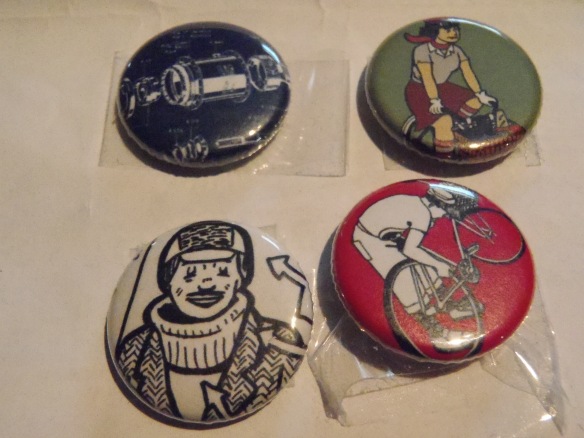 I have a general policy of not bedecking my actual cycling gear with bike buttons or badges.  I feel that the cycling equipment is sufficiently bikey as it is and I tend to put the buttons on things I wear off the bike. However, since I don’t feel like poking holes in the Gore-Tex jacket I’m using right now ($8.00 at Value Village!!!) I’m wearing the Winter Cyclist pin on my helmet. Thanks Shawn! 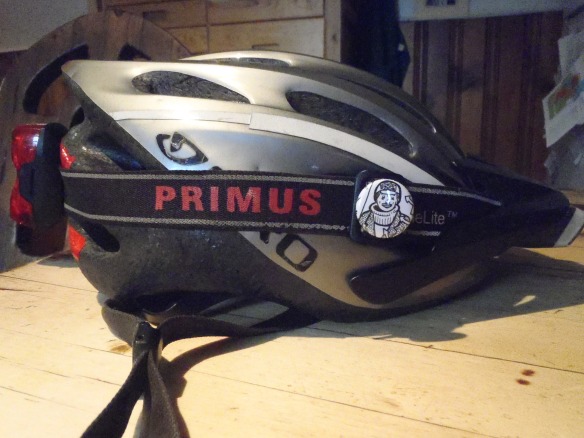 It was a slow starting day. I was less than lively on the New Year’s morning. Was it the late night? The perry, champagne and scotch? The cold I had felt starting to settle into my head the previous day? None of these things were going to stop me from having a good, long bike ride to start off 2013. The long stretch of frigid temps in the -20C range had finally broken and the afternoon promised a balmy 0C with brilliant sunshine.

After sleeping in and puttering around in kitchen cleaning up the detritus from the night’s get together it was nearly 1:30 before I was finally getting out the door. I had originally planned an ambitious trip through the entire length of the river valley trail system, from Hermitage Park to Terwilleger.  An honest assessment of my energy and the daylight hours available caused me to scale that back to just Hermitage to downtown. To ration my strength a little more I took my bike onto the LRT, riding the train to Clareview a short distance from the start of the trails. 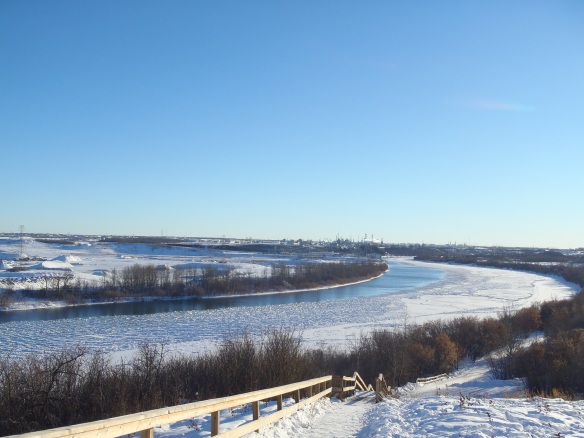 The start of the ride. Northeast Edmonton.

Although the trails were cleared as I expected, I had made one significant miscalculation. I knew that there would be lots of other people using the trails on this beautiful New Year’s Day but I had not realized how many of them would be walking dogs. In the first couple of kilometers I must have encountered at least 50 people and more than a hundred off leash dogs. Progress was slow to start. 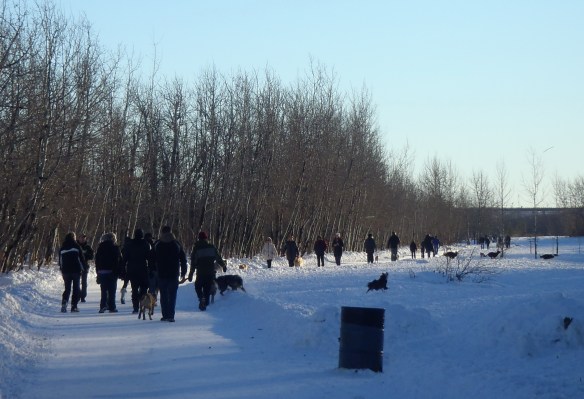 The trail choked with dog walkers. A sight to send a chill down the spine of a cyclist.

After passing the popular dog walking area I was able to make better time. I passed under a railway bridge, and the two bridges carrying the eastbound and westbound traffic on the Trans-Canada Highway.As I snapped photos of the bridges my theme for the day occurred to me. This was going to be a bridge ride. The railway bridge was made in 1908 only four years after Edmonton was incorporated as a city. The other two bridges were pretty functional affairs but I like the windows in the piers of the first and the simple cusp on the piers of the second. 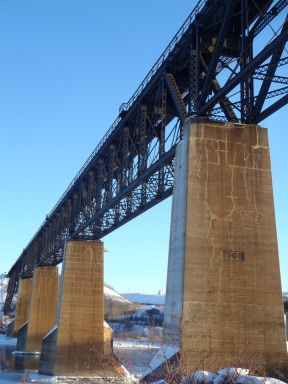 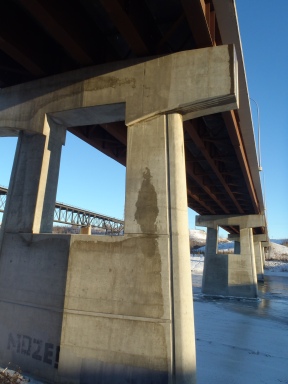 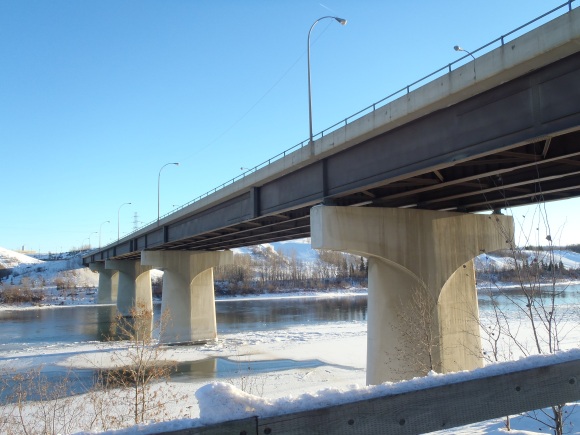 Not much further along I approached the first of the many pedestrian bridges. I love the fact that at some point in the past the city council decided that building these bridges was a good idea. Having a number of these spans dedicated to non-motorized traffic really adds to the pleasure of using the trail system. This first one leads to the pleasantly post-apocalyptic Strathcona Science Park. While crossing the bridge I looked back and noticed a train passing over the railway bridge which annoyed me as I’d like to have been under it at the time. Looking over the bridge I spotted a number of ducks in the water, apparently content to remain in Edmonton through the winter. I can’t imagine why. 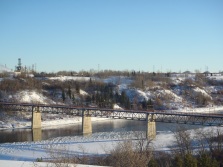 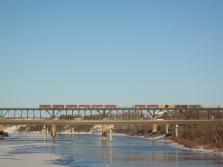 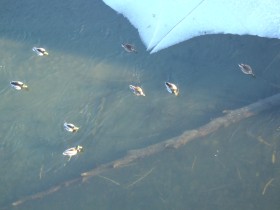 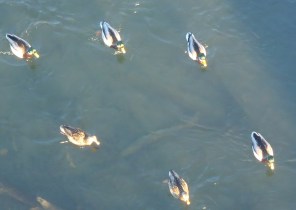 The trails in the science park weren’t  well cleared so I didn’t go far. I stopped at a snow covered picnic table and carved out a spot to have a snack: tea, cookies from my local bakery and a teeny celebratory sip on Macallan 12 year old scotch. On the way out of the park I stopped to help a young couple push their car from where it was stuck in the snow and back onto the road. There is something very satisfying about zipping up on a bike to help a stranded motorist. When my bike becomes stuck I can lift it free with one hand.

From here I crossed the river twice more on pedestrian bridges, the Ainsworth Dyer (Rundle Park) and the Capilano. The trail around Rundle park was cleared to the asphalt and I zipped along a good pace. I also crossed a little wooden bridge but I won’t include that in my total as it didn’t span the river. 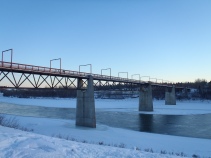 I crossed under the multi-laned Capilano Bridge next and then pushed my bike up the stairs to the pedestrian walk way. Although there is a nice simple geometric appearance to the bridge from underneath, the top is completely without charm . It was a dirty, slushy crossing accompanied by the din of traffic. 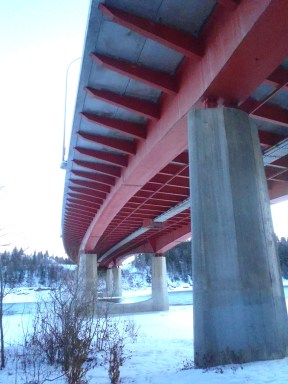 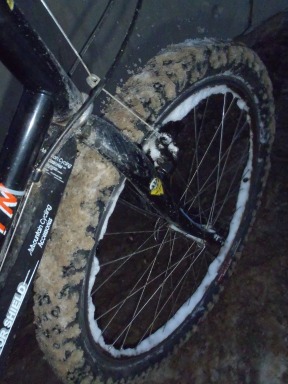 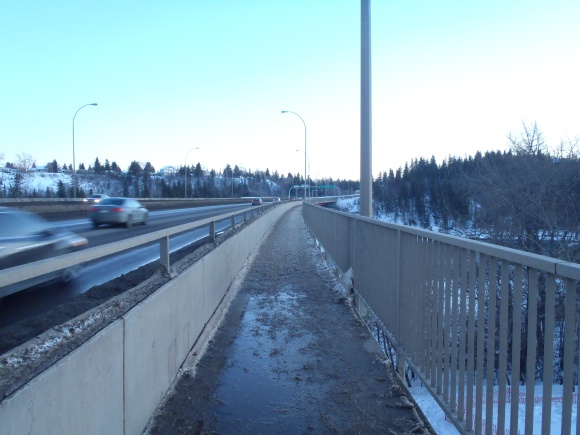 By now the sun was setting and I started pushing the pace to wrap up the ride. My camera battery was also running out of energy. So were my legs. The last  crossings of the trip were the Dawson bridge, the Cloverdale pedestrian bridge and the Low Level Bridge. As I was snapping pics at the Low Level a couple of cyclists zipped passed and I got a shot one popping a wheelie.

Once back at street level I headed directly home, pleasantly tired. Over the course of the day I had passed under 3 bridges and crossed over 7 more, something I had never done before. Not a bad way to start the new cycling year.