Continuing with the Errandonnee Challenge I mentioned in my last post, here are Errands #4 through #8. And a few bonus photos, just ’cause I’m feeling generous (or maybe mean).

Normally BWN isn’t open on Sundays, but during the water problems at the south shop it was announced that BWN would be open instead. Even though the water was restored in time for the weekend we still opened the north shop. The shop is only a 5 minute pedal from my house so I popped over to put in a few hours. While there I spent a little while salvaging some hubs from a couple of damaged rims, starting tuning up another bike, and helped a fellow who was working on his first wheel build.

Bikes for sale. Come and check them out! Choose one that has already been tuned up by the volunteers or buy one as-is and fix it up yourself.

I started working on this old Kuwahara Savage MTB. It’s a bit scuffed up but will make a great stealth commuter (a sweet riding cromoly frame c/w eyelets for racks and fenders that most thieves would’t look twice at). BWN seems to be Kuwahara/Apollo central right now. There are several more.

I also cleaned and oiled my own bike.

Our old printer died a little while ago and my wife has been in dire need of a replacement (me, I didn’t use it often). After finishing at Bikeworks I headed downtown to buy another printer. I’m picked one with a small foot print as space is at a premium in our small house. Even so, it was about as big a package as I was equipped to carry on my bike. The main routes with bare pavement were no problem but the box slid around a bit on the heavily rutted side streets. Nonetheless, the printer arrived home intact and is now installed and working perfectly.

I used the omnipresent Canadian Kickstand to get this picture.

I was treated to another gorgeous sunrise on the way to work this morning but was running late, so I can offer no photo. After work I snapped a few pics of the road conditions near my workplace. These are on an official bike route. The unseasonably warm weather has continued and so real, honest to goodness asphalt is emerging from under the thick snow hard pack. The city keeps the main roads cleared to the asphalt ( and does a pretty good job) but only blades residential roads to a 5 cm snowpack. They kept up on this through the first part of the winter but have been falling behind a bit and in many areas there is a good 6 inches or more of rutted, hard packed snow and ice.

So that’s what was under the snow! I discover that the winter months have not been kind to the road surface (none too good to begin with). This area is due for repaving this summer.

EGS is conveniently located on my homeward route and I occasionally stop to pick up foodstuffs there. I was disappointed to find that they were out of Ohsawa Namu Shoyu soya sauce. Best…soya sauce…ever. On the other hand, that stuff ain’t cheap. I did come away with numerous other items. 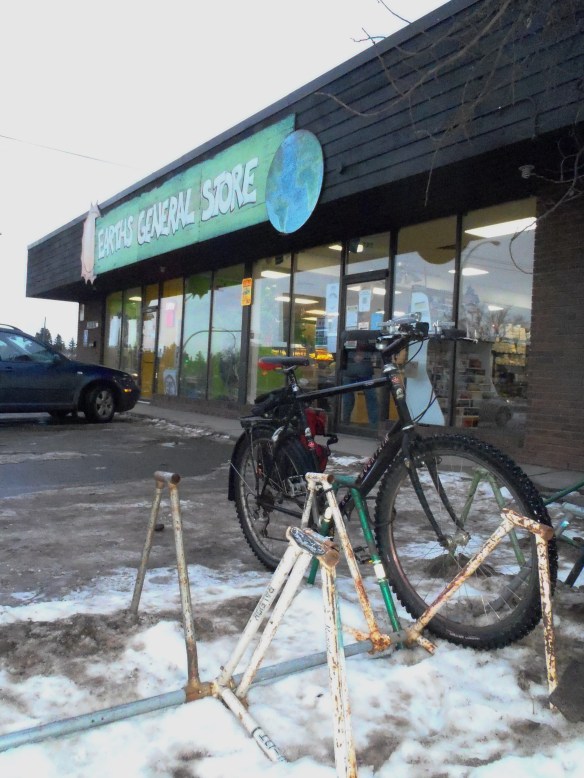 Note the bike racks made from old bike frames.

This  was one of two open house meetings that the city is holding to communicate the bike infrastructure plans for the 2013 construction season. This meeting was held in a school right next to one of the bike routes and was well attended with neighbourhood residents and cyclists: at least a hundred people, maybe more. Rolled out on long tables were maps of the proposed work, with post-it pads so people could make comments about specific issues. City engineers were present at the various tables to answer questions. I watched the presentation, left a couple of comments, chatted with a couple of other bike commuting types I knew, and I headed for home. 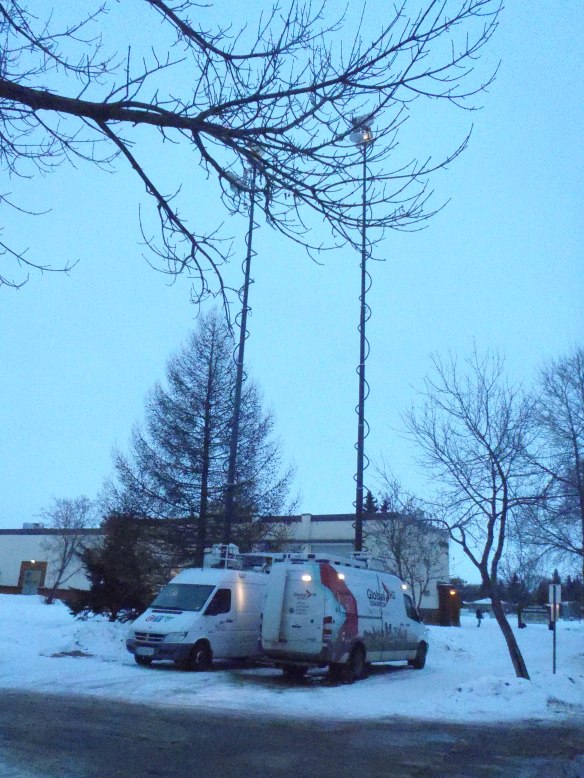 There was a lot of local news media in attendance.

Not at all related to the errands, but it was a beautiful night so I stopped to take a few pictures on the way home. 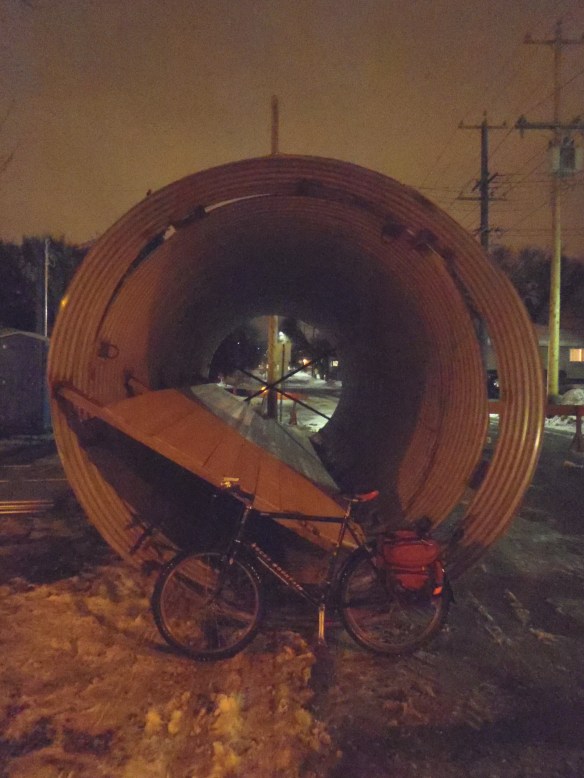 Edmonton: The City of Pyramids.

The pyramids are the Muttart plant conservatory, a green haven during the bleak winter months. At night they are well lit and change colour….a lot. 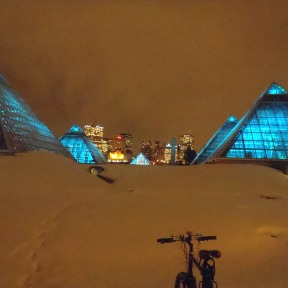