This past long weekend I finally – after what seems like an eon since the distantly remembered autumn – finally, got out of the city for a moderately long ride. Though I’d planned a ride between 75km and 100km, it ended up being only 50km. Still, a good inaugural ride for the season.

Despite the forecast of gloom and showers, the weather of the day lived up to the promises of this sign.

Last summer I took a number of rides through the countryside north of the city. This year I want to explore the many unpaved township and range roads in the area. With this in mind I brought the Kona Jake on this first trip. It’s a sort of rugged road bike that is great at handling a mixture of paved and gravel roads, rolling nicely on the 700 X 35 Schwalbe Marathon Dureme tires.

There was a stiff headwind as I rode out of city, but I was happy enough to finally be on the open road that it didn’t much bother me. I took my normal route up 82nd street and over the Henday, then over to 50th street and north from there along familiar territory. When I finally reached one of the roads I wanted to explore I discovered that it appeared to have been recently graded: new loose gravel and loony sized rocks covered the entire road surface. I tried riding along it for a ways but it was very rough going, with my wheels occasionally firing little stones off to the side with pop and whine. I persisted for about a kilometer but was not really all that disappointed when my phone rang with a call summoning me home. I’ll go back and try the road another time once it gets packed down a bit.

There’s not much shelter from the wind out on these roads.

As I sped homeward with the wind at my back,  back I encountered a large group of road cyclists on their way north , I assume on a club ride. There were between 20 and 30 of them spread out into three groups, appearing to take the business very seriously as they were pedaling with a rather intense look and for the most part declined to acknowledge my friendly nod and wave. I did get a  companionable “hello” from one fellow and a cheerful, sunny smile from one woman. I suppose I didn’t really fit in with the Lycra Lodge what with my sandals and socks, 3/4 length cotton pants, commuting helmet with lights strapped on,   and baggy jacket snapping in the wind like a flag.

The rest of the ride home was speedy and uneventful. It was a nicely gentle start to the seasons riding and next weekend I hope to manage a longer ride. 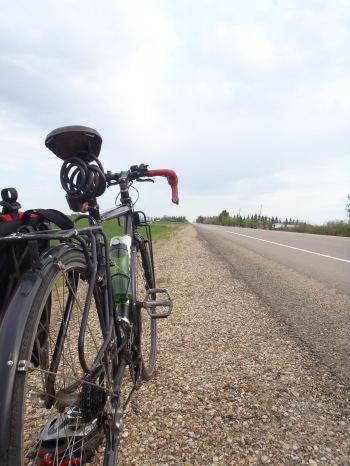