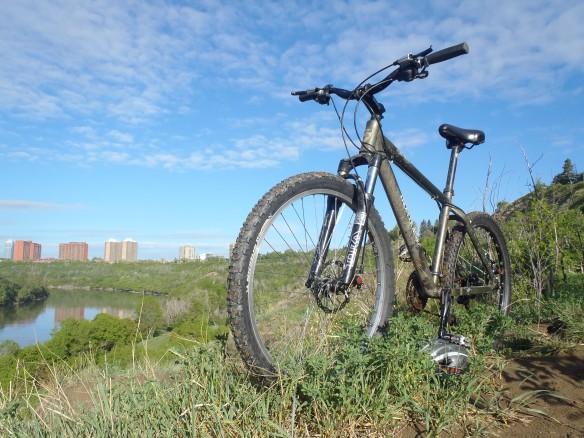 What I know about mountain biking you could fit in a child sized CamelBak and still have room to spare for a week’s worth of back country bikepacking supplies. That is to say, though as an unhelmeted child I would ride my banana bike down the 45 degree slope of our local gravel pit ; and while as a teen I road my Supercycle 12-speed around the rocky, cliff-side paths of my coastal Newfoundland home; and as a young adult I pedaled my rigid framed MTB through my Dad’s rough and ready wood cutting tracks – I have very little knowledge of contemporary mountain bikes and the specialized technology developed for this type of riding. Still, I didn’t let that stop me from rehabilitating the Iron Horse bike I salvaged more than a year ago.

I refer to this bike as my Ravine Bike not because I ride it in the ravines (although I do) but because that’s where I found it: in Kennedale Ravine. I discovered the Sachem when I was volunteering at a ravine clean-up . It had been abandoned for some time and I had to tear it free of the vegetation that grown around it. It had been stripped of the wheels, front derailleur and shifter, and front brake lever and caliper. In the past I’ve found the remains of stolen bikes before and they have always been low-end pieces of junk. This one however seemed to show some promise. 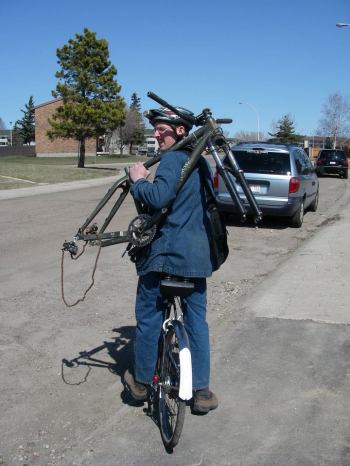 Here I am carrying the bike home from the ravine,enjoying the irony of transporting a 2007 mountain bike with a 3-speed forty-two years its senior.

When I got home I checked to see if it had been reported stolen. It had not. Or if it had been, enough time had passed that the record was no longer on file. At first I considered stripping it for parts as there were some decent components left on it. However, it occurred to me that it wouldn’t take a lot of effort to get it back in working order, and a decent mountain bike was one thing I didn’t yet have in my little fleet.

I did a little internet sleuthing and found that the Sachem 3.0 had been Iron Horse’s entry level all-mountain bike (something between a cross-country  and a down hill bike) and likely retailed for more than a $1000. Not a high-end bike, but not a department store piece of junk, either. You can see the original parts spec here and read a BikeRadar review here.    It seemed like as good a bike as my very mediocre skills warranted. The frame is quite stout and looked like it could take a lot of abuse, more than I’d likely ever dish out.

The first step in rebuilding it was acquiring the parts needed, not being the sort of components that I already had in my little stockpile. As I usually have a number of bike projects in the works, I didn’t rush this one. Over the course of the summer and early fall I kept an eye out  for components and accumulated them. I found parts at Bikeworks, on Kijjijj, and at the MEC gear swap. The only part that I had to buy new was the seatpost.

The wheels were the toughest to find as I am cheap and decent disc brake wheels don’t often show up at Bikeworks North, where I get most of my parts. I picked up the rear wheel (Mavic on Deore) from a Kijiji ad and the seller gave them to me for half his original asking price because he accidentally gave the wrong address and sent me on a half-hour wild goose chase looking for his house. For the front, I salvaged the Rhyno-lite rim from a     wheel with a dead hub, and the hub from another wheel with a tacoed rim. The dimensions worked out so nicely that I was able to do the trick where you tape the new rim to the old one and transfer the spokes one at a time. This is such an easy way to build a wheel that I was able to do it while sitting at home watching a movie with my family (The Adventures of Tintin).

Assembling the rest of the bike wasn’t difficult, although setting up the brakes caused some head scratching, as I’d never worked with disc brakes before. Happily, I eventually figured it all out and by late winter the bike was complete. I had the chance to ride it a few times before the snow finally retreated from our fair city (kicking and clinging on to the bitter end as it did this year) and though it was  fun to ride through the snow, I was looking forward to a proper trail riding test. 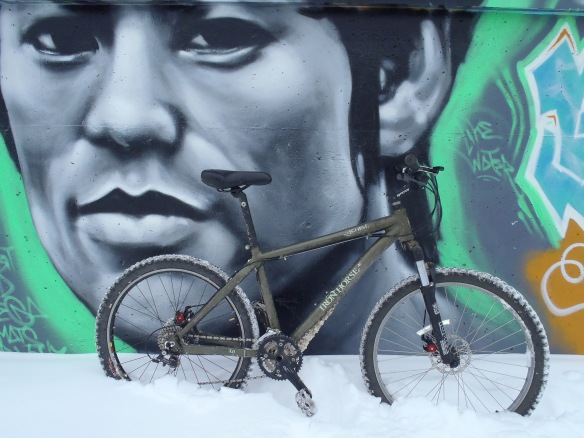 If you’ve read any of my bog posts in the past week, then you know that I’ve been really enjoying this bike. I’ve been discovering new trails in the river valley and have been riding some fairly technical singletrack with more confidence than I would normally have. Having a decent quality bike has really made difference to my riding experience. The geometry and handling are neutral enough that it seems to do everything adequately and forgive the flaws of a weak rider. I still want to upgrade a few components when I have the chance, and I have to fine-tune the shifting a little, but nevertheless I’ll be riding this one this summer. 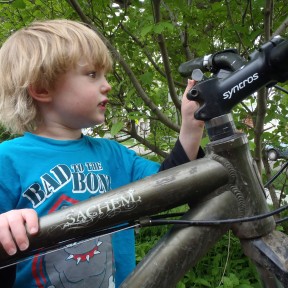 I want to upgrade the functional but uninspiring Alivio shifters.

My first foray into the world of disc brakes: finicky to set up but , boy howdy, they sure work well.