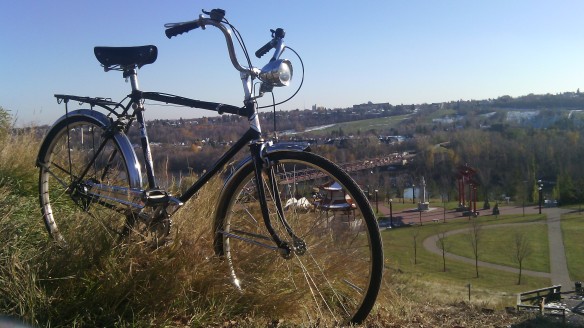 Challenge complete! It was warmer this week, most of the early snowfall has now melted and the normal autumn weather felt like a reprieve from a winter that hasn’t officially arrived yet. I found the time to get my third three-speed bike into service to ride for the challenge and met my additional personal goal of riding each bike at least three times during the three weeks.

The last of my bikes to be used in the challenge is the first three-speed I ever owned. I bought this 1965 CCM Continental a few years back from the Raving Bike Fiend. It’s a lovely old bike that has only seen light use since I acquired it. Unlike the Superbe or the R20, and for reasons I can’t quite pin down, this one insists on being ridden at a leisurely pace. I’ve mostly used it for relaxed family rides or as a show bike for group rides.I rode it for the 2011 Edmonton Tweed Ride. I dressed it up a bit for the first 2012 Edmonton Steampunk Bike Ride. On the more practical side, I rode it to work one frigid winter morning when it was so cold that the freehub on my winter bike was freezing up – no need to worry about that with the Sturmey-Archer three-speed.

The bike has front and rear lights intended to powered by the dynamo built into the AWG rear hub but I’ve never got around to wiring them up properly. It has steel rims, a one piece crank, fantastic high bars and weighs about 40 pounds. The bike is a bit small for me and as nice as it is to have some Made in Canada content in my little bike fleet, I think I will soon sell this one. I hadn’t ridden it in all of 2016 and I don’t believe I rode it more than once in 2015. With this October Challenge I was glad to have a reason to shuffle it out from the back of the bike pile in my garage, dust it off and ride it for a few days.

On Sunday and Monday I played it safe and commuted on my winter bike but by Tuesday the conditions seemed suitable for bringing out a three-speed again for the 20km round trip to work. Road construction caused me to detour onto a short segment of footpath. 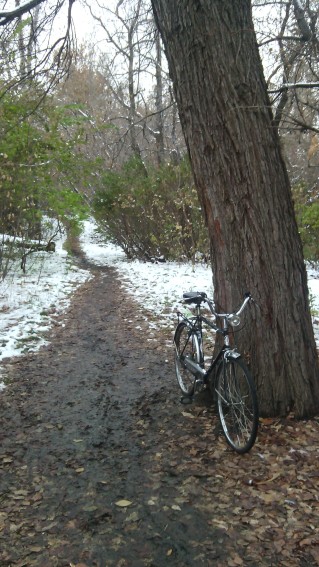 On the way home I stopped to take a few pics of the rapid progress that’s been made on the new footbridge that’s part of the city’s funicular project. Given the foul weather on the previous Friday I had been cranky about the lengthy detour this bridge construction forced me to take. However, now that the hill is open again and I can see how much work they got done over the course of four days I have to be impressed with the good job the workers seem to be doing. 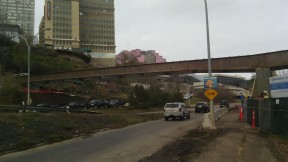 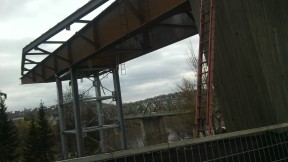 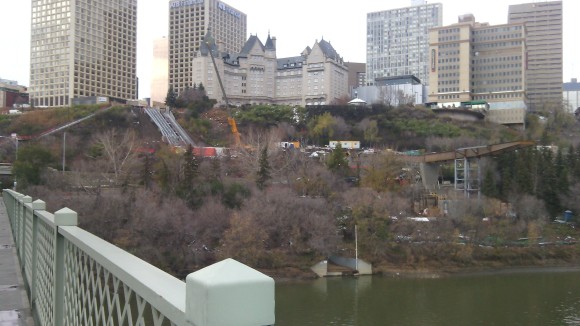 That evening I also completed a second qualifying ride when I rode my Raleigh 20 on a 5.5 km round trip to Kingsway mall to run an errand. I didn’t stop to take any pictures but I did notice just how much more nimble and zippy the R20 is compared to the CCM.

On Wednesday I rode the CCM to work again for another 20km roundtrip. On the way back I stopped at the southside Earth’s General Store for supplies. My bike was in good company at the rack with a Kuwahara Super Tour and a Norco Eurosport Tri-A with an appealingly gaudy pink & white splatter paint and added moustache bars. After leaving the store I indulged in another beauty pic of the CCM and a riding bike selfie. (Remember when they were called Panda Shots?) 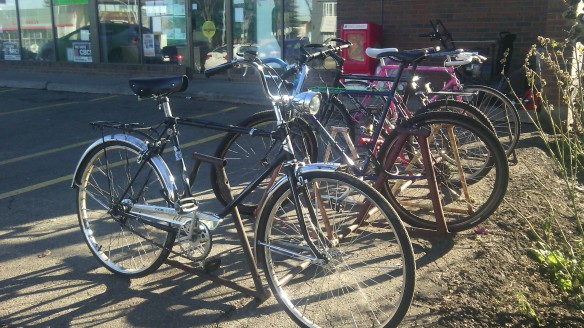 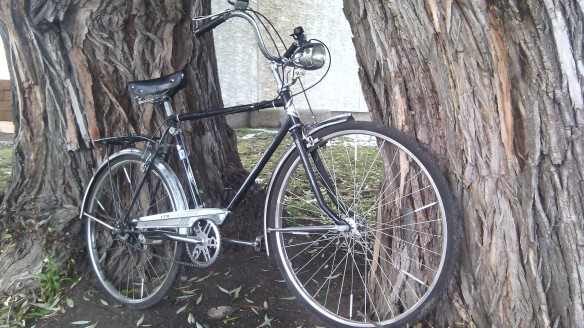 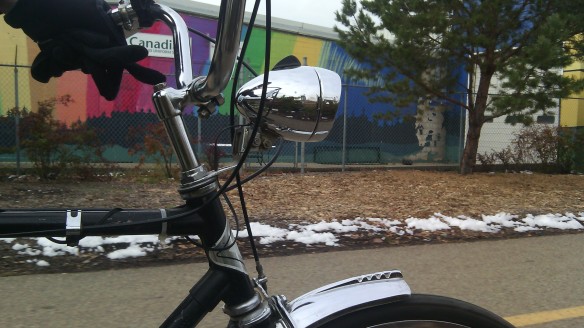 I managed to get one more qualifying ride in on the CCM with a 8km roundtrip downtown to visit the bank, shop for supplies at the downtown farmers’ market, and drop in at Bikeworks North on the way home. I couldn’t let the entire October Challenge pass without getting tweeded up at least once so I dug out my Harris Tweed for this ride. 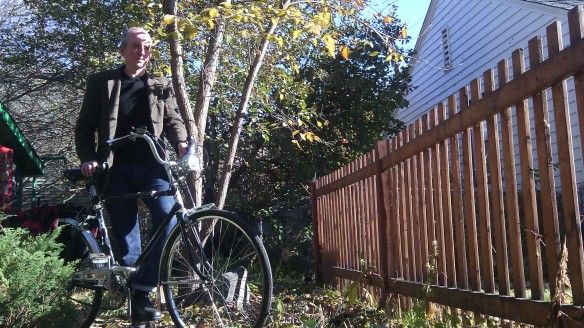 It was a wonderfully relaxing afternoon ride under a bright blue sky while breathing in the crisp autumn air. While downtown I snapped a few pics of the recently completed Kelly Ramsey Tower. The original building was badly damaged by a fire in 2009 and was eventually demolished. However, much of the original facade was salvaged and reassembled as part of the new building. I often feel ambivalent about projects that preserve the only exterior of a building but in this case it was well done to save something from the aftermath of the fire. 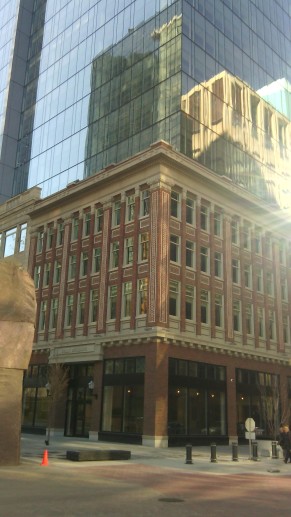 After popping in to Bikeworks to say hi to the other volunteers I rolled across the avenue to the Hungarian deli to buy a couple of links of their medium-hot sausage. This little unassuming shop has lots of interesting products and is also my source for jars of thick, tangy rosehip jam. 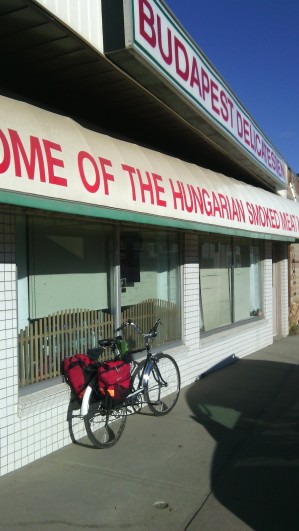 Thanks to Portland’s Shawn Granton of Urban Adventure League  & Society of Three Speeds for creating the challenge.