I started this morning’s commute in a grumpy mood.  The temperature had dropped overnight to-14C and that thrilled me about as much as bathing in a tub full of garden slugs would.  The snowfall late last week didn’t faze me. I expect a few spring snowfalls. However, I do resent dealing with temperatures that low in April. The average low temperature for this date is-2C.

On the other hand, the roads were free of snow and the rising sun was blazing brightly in the clear blue sky. Once I re-accustomed myself to the effort of moving my heavy, clown-sized cold-weather boots around in circles I started to enjoy the ride a little. The studded winter tires whizzed pleasantly over the asphalt.

When I reached the river valley the commute got very good, indeed. 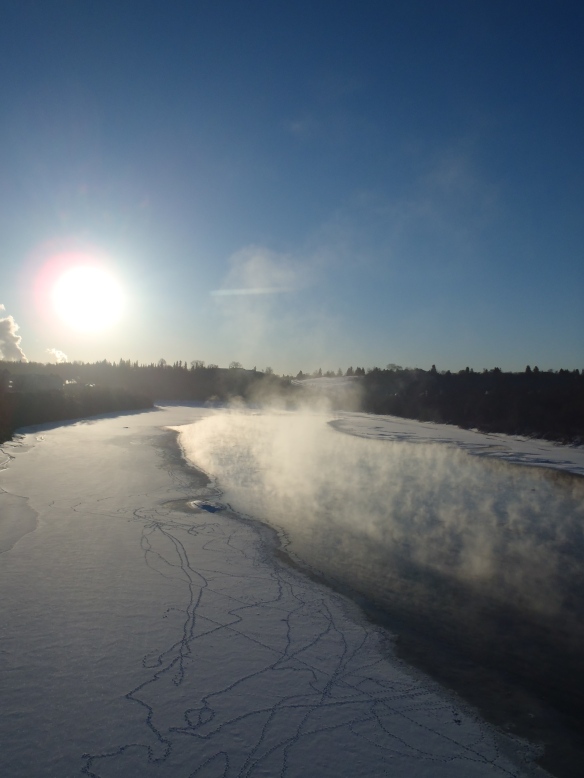 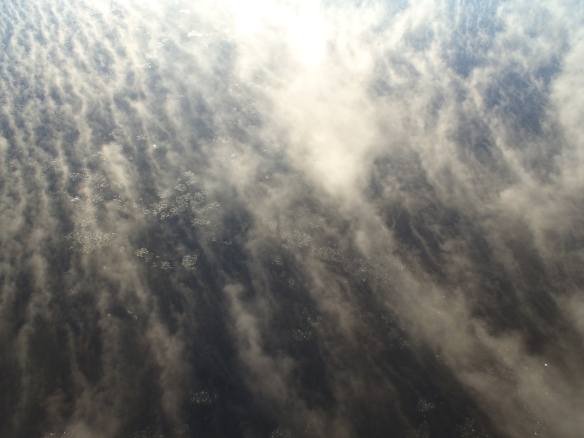 Tendrils of fog and small pans of ice race past each other.

Animal tracks stitch the snow covered ice like the work of a drunken tailor.

Over the warming river a heavy fog was rising in the icy air.  The vapour was moving against the swift river current making it seem to race upstream at improbable speed. Even though I was running late for work I stopped on the pedestrian bridge and peered down at the streaming, roiling vortices  of mist. I watched its mesmerizing progress for several minutes.Two geese were slowly making their way upstream. They didn’t seem perturbed by the unusually cold weather. Why should they be? They’re covered in goose down. 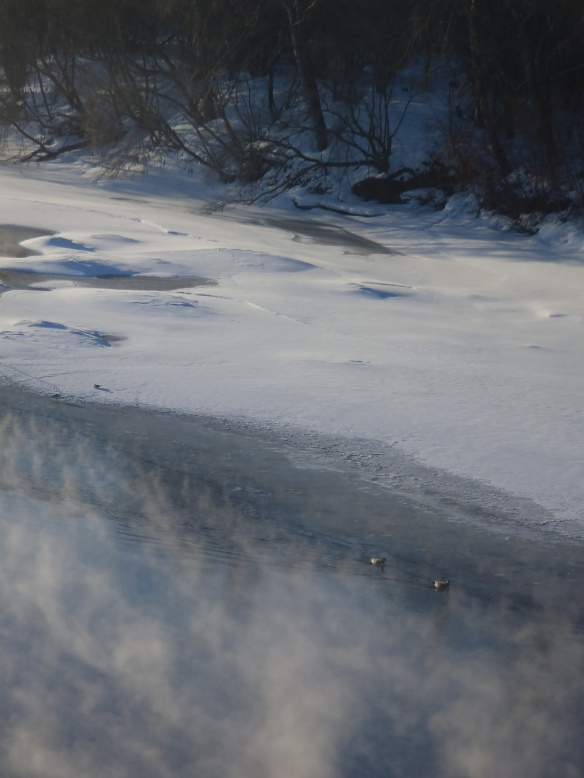 Geese In The Mist 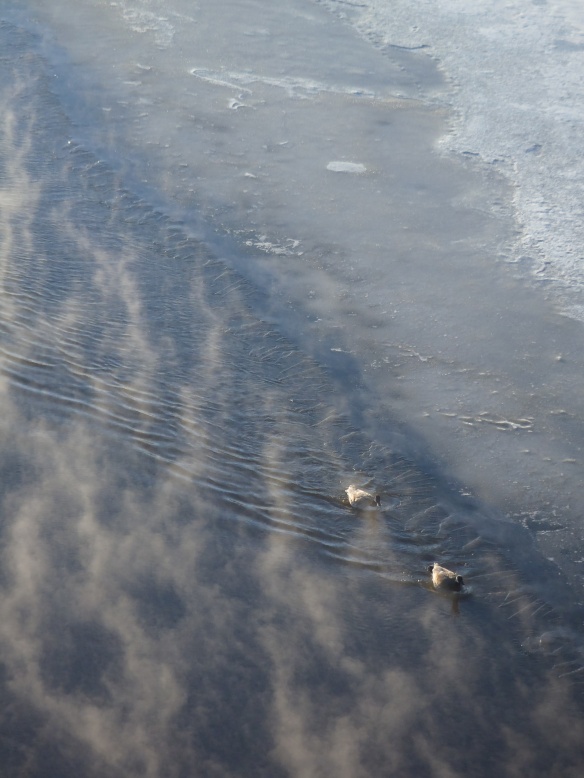 At this point I wasn’t much concerned about the temperature, either. It was small price to pay for the spectacle over the river. As I rolled up through Mill Creek ravine I reflected on the benefits of bike commuting. It is certain that without the motivation of getting to work I’d not have been out cycling that early on a frigid spring morning. If I was in a motor vehicle I’d not have been able to impulsively stop in the middle of a bridge and watch the mist. Just as I was about to leave the ravine trail and head back up to street level a woodpecker started tapping away off to one side of the trail. Then another started on the other side, treating me to a percussive duet in real life stereo.

At this point my forward momentum drained away and I stalled in the middle of the trail caught between two conflicting forces. The river valley was urging me skip work and just spend the morning watching the river and riding the trails. I was already late for work because of my stop at the river. On the other hand, my knowledge of the huge backlog of jobs to be done at work and my sense of responsibility were pushing me to continue. I can’t remember the last time I skipped work without a legitimate reason. Legitimate in the view of an employer, that is. I don’t think that being momentarily overwhelmed by the joy of life counts.

Unfortunately, adult responsibility won the day: I left the ravine behind and cruised off to work. Still, it was a danged good commute. 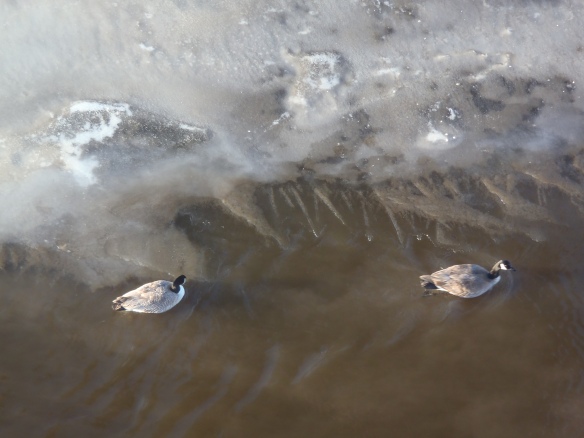 News of my recent declaration of Spring has obviously come to the attention of the geese. I spotted these on my ride home today. 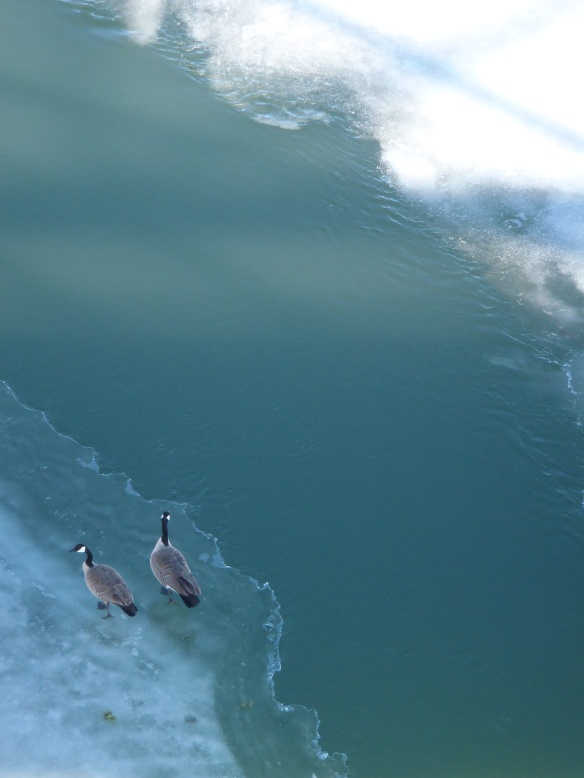 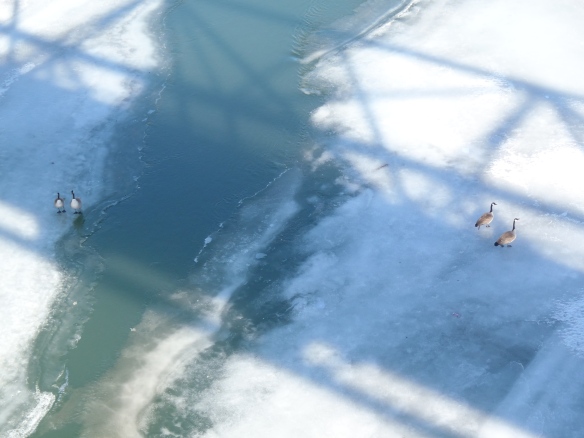 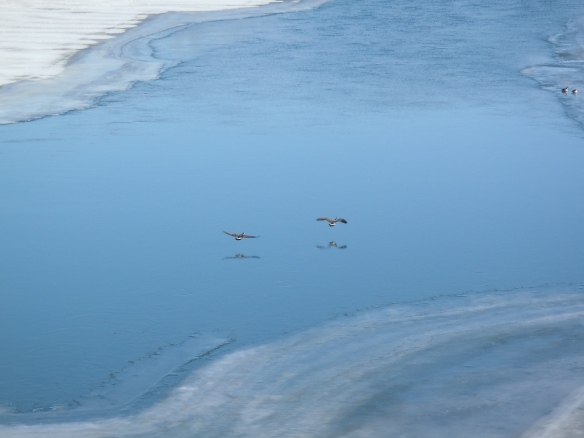 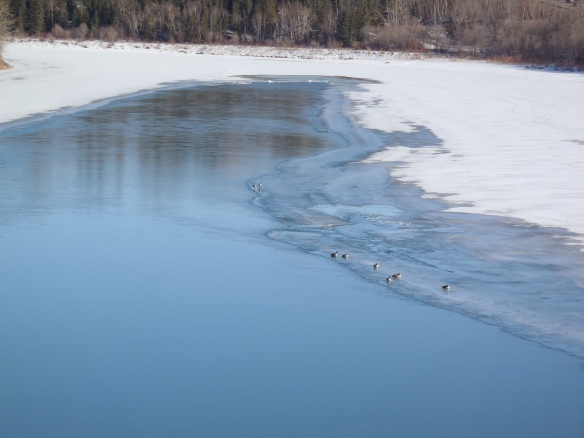 The North Saskatchewan River runs that through Edmonton is a wildlife corridor . The river valley is an extensive and mostly continuous system of parks and trail 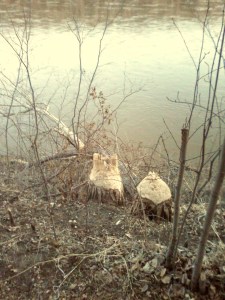 s and offers plenty of opportunities for spotting wildlife. Over the years I have seen deer, coyotes, falcons, beavers, muskrat, geese, a pelican, porcupines, rabbits and multitudes of songbirds. All of this in the center of a city of nearly 800,000 people. So far this year I haven’t spotted many critters although I have seen many signs. The rural boy in me is always happy to see creatures other than humans and their pets. For me the close proximity of the river valley is probably the single biggest quality of life feature of Edmonton. 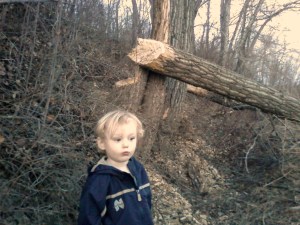 There are beavers toiling away in the river. Once, while walking down by the water early in the morning I startled a beaver that was quite a distance from the water. It turns out that a beaver running for the river is not a graceful sight. I haven’t spotted one yet this year but as these pictures show they have been industrious.

The geese have been making themselves at home since their arrival. This one showed no concern at all as I cycled up behind it. 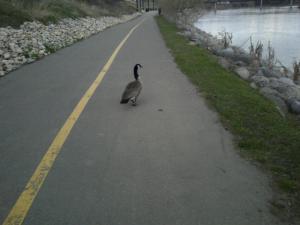 I need a better camera than my camera-phone if I’m going to continue  blogging. 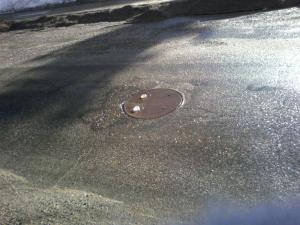 This storm sewer has been overflowing for days now. 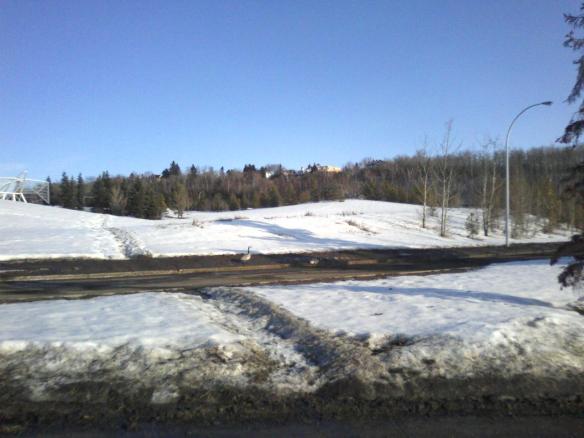 The first geese I have spotted this year. It must actually be spring! 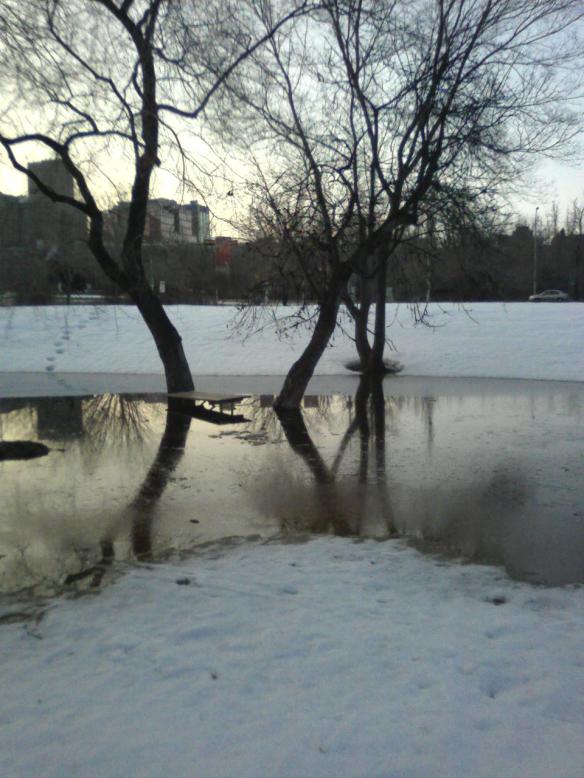 It looks like a wet day for a picnic on the Muttart's grounds.