Last Sunday I took an early morning ride out to the semi-abandoned , post-apocalyptic looking Strathcona Science Park that sits at the Eastern edge of Edmonton.

I find this park to be a weird and wonderful trip back in time. It was created in 1979 to protect an archeological site from industrial encroachment. It enjoyed a brief life as public science center but this was soon ended (by provincial budget cuts,  I suspect) and it has remained frozen in time since then. My wife remembers a junior high school trip when her class went to the park to explore the varying science displays in each of the bunker-like subterranean pods.  On a bicycle related note, she recalls that it was the first time she saw a bike hooked up to produce electricity. The park is still maintained by the province in a minor way. The grass is cut and the garbage cans emptied. However, the interpretive buildings and the archeological lab and site have been abandoned and allowed to slowly crumble into a decrepit state.  The first time I cycled out to this park it seemed to me that it was the ideal site to shoot a low budget post-apocalypse SF film.

I have a fondness for public park architecture of this period , no doubt instilled during the numerous camping trips my family went on when I was a child. Ah, nostalgia. Though it is a sad waste of resources, it also seems ironically appropriate that a park established to protect an archeological site is itself crumbling into a historic relic.

As a tribute to a fine blogger ( Yes, I mean you Steve!) I have included a few pictures of signs with historical information about the park’s site. 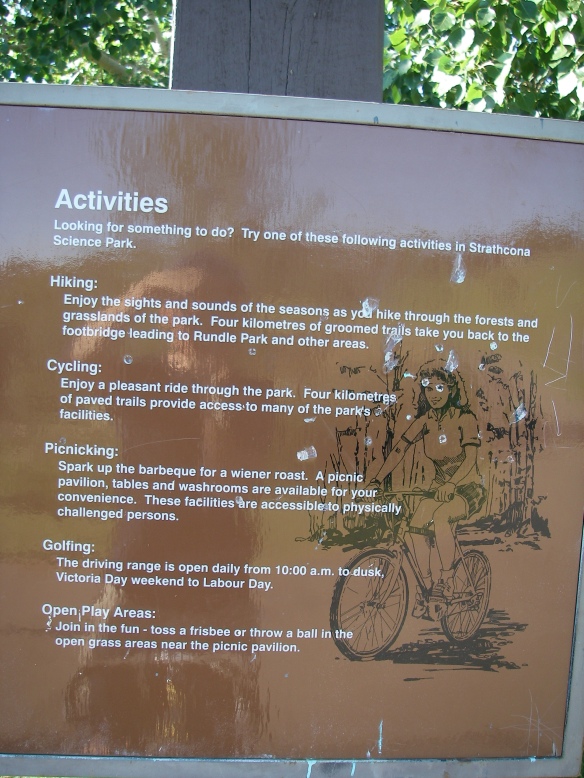 This is the first sign that all may not be well. However, there are lots of mountain bike trails in the woods right along this stretch. 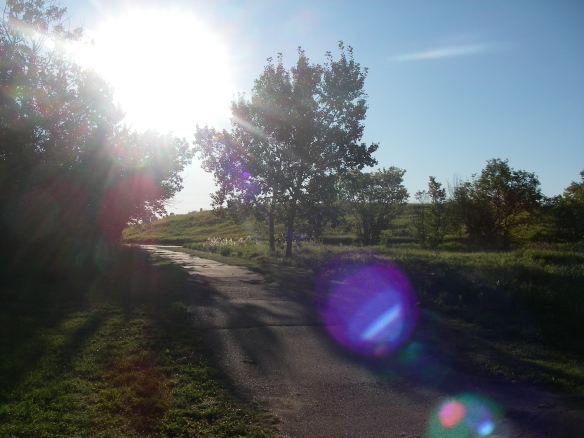 Well, this looks OK. The flags are a bit tattered, though... 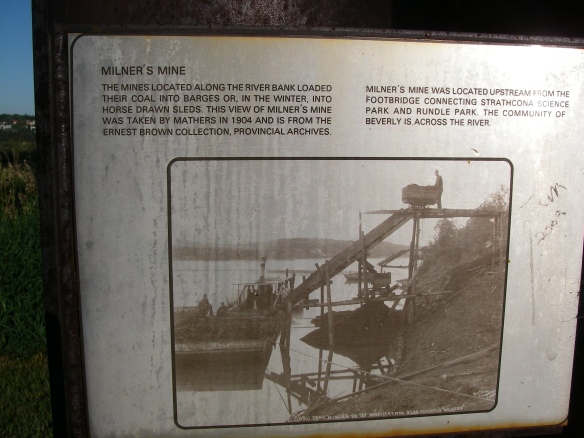 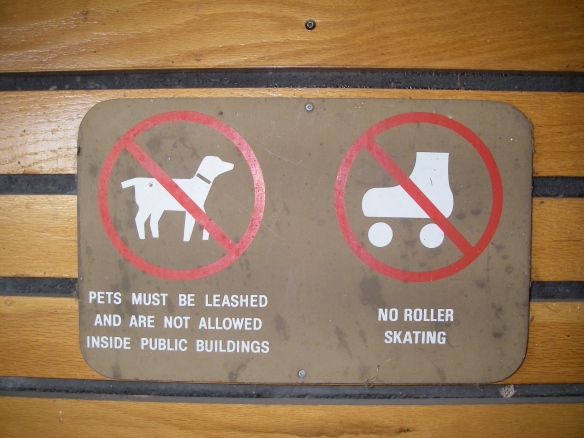 Golly, I'm such a rebel!

These bunker buildings are pretty nifty looking. There are several of them on the grounds.

The two entrances are on the side of the big loading door in the middle. They are pretty overgrown too. Hey, what does that sign say?

....and that is to climb up onto the roof! Yep, looks pretty bad.

Here is some more of that earth berm / bunker vibe. 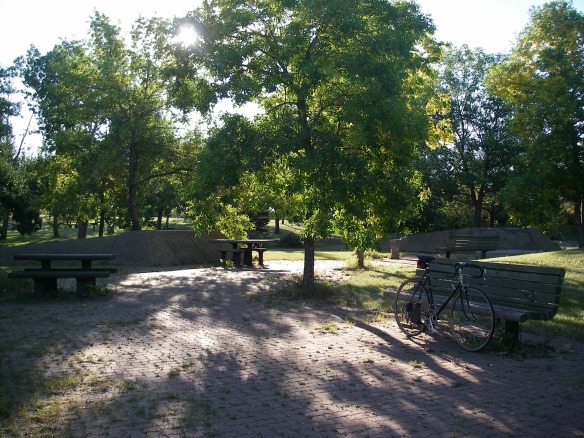 Ummm....Mr. Park Official, Sir? This section of the cycling trail could use some attention 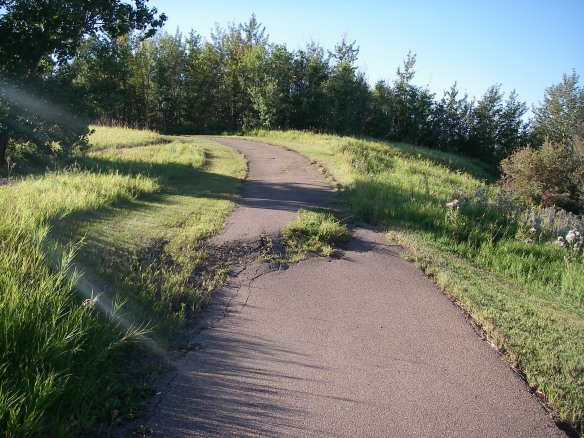 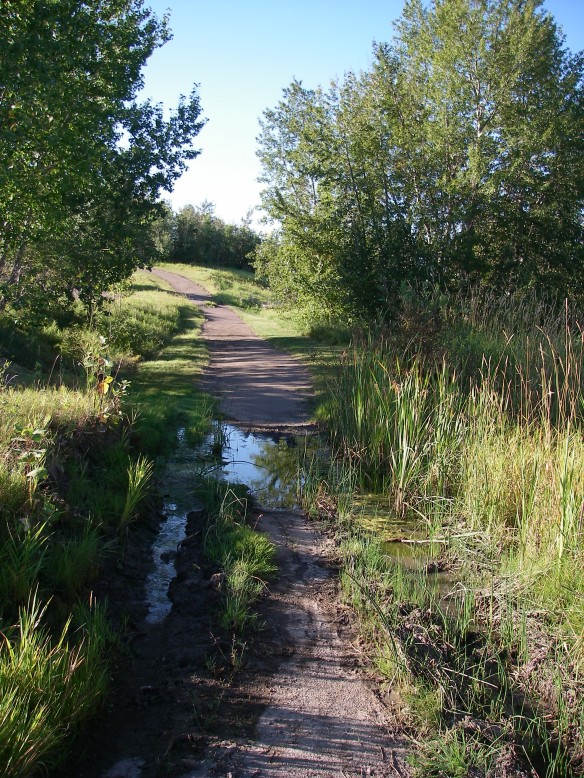 ...and this also. On the other hand, the cattails are pretty.

The abandoned Archeology Lab! Do forgotten archeologists lurk within plotting their revenge?

A boardwalk and a dig site. Cool! 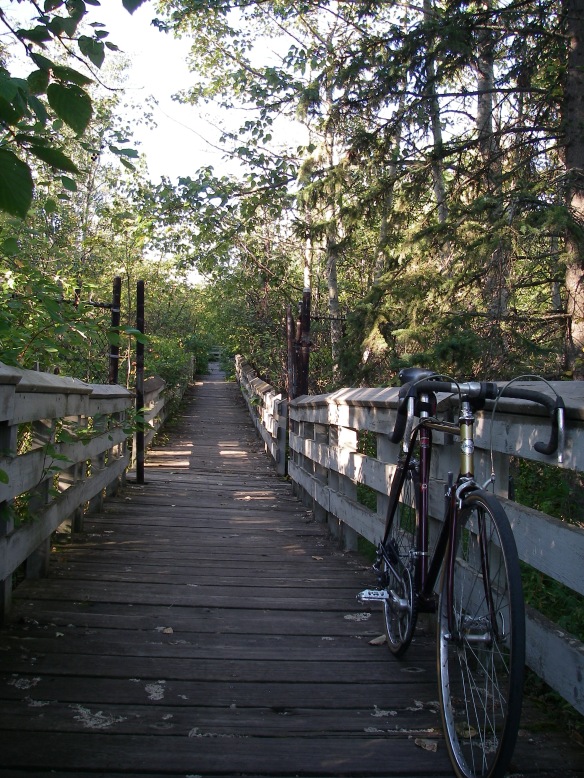 ....or maybe not. At least it didn't collapse while I was on it. 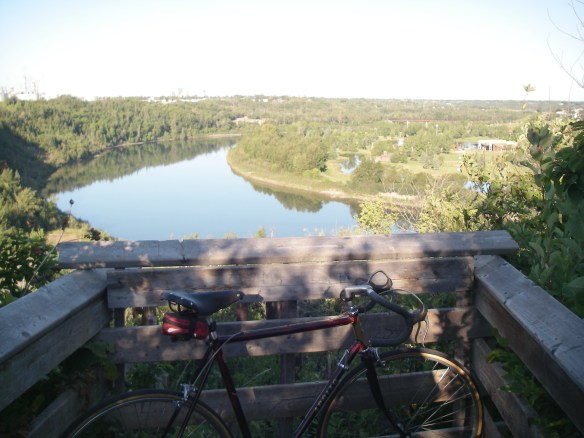 Lastly, a nice view over the river.