This page is a work in progress, but here is a quick list in order of acquisition.

I picked this up cheap and second hand to be my commuter after using a truly awful bike shaped object for my first year of commuting. The Iron Horse served me well for several thousand kilometers. It was the first time I used a bike with a 34tooth on the back ( a cheap Shimano megarange freewheel) and I loved it for powering up out of the river valley while towing my daughter and groceries in a trailer.

I guess Iron Horse made some decent bikes but this really isn’t one of them.  The frame is massively overbuilt for a commuting bike. It  looks like they took a heavy mountain bike frame and added fenders, a rack and bottom of the barrel components and called it a commuter. I have since upgraded many of the components and now use it as my winter bike.

This is the first decent quality bike I ‘ve ever owned. I bought it second hand from a Kijiji ad in spring 2010. 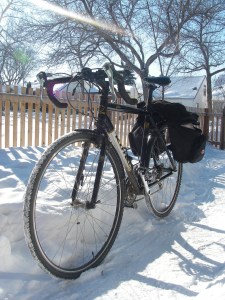 This is my favourite bike. I could ride this one all day, every day. Love, love, love. In its day, it was Nishiki’s top of the line touring bike for the Canadian market.

I bought it with the thought of upgrading the components with modern ones but it is in such good shape  and works so well as it is. I had never used downtube shifters before but it didn’t take long to get used to them. It such a pleasure to ride. Smooth, light, fast.

The seat post is stuck and  set a little low so I’ll be working on that this Spring. I’ll also be setting it up a a functioning touring bike. I have some VO fenders waiting to be installed and I’m considering which racks to install. This one was also purchased from a Kijiji ad.

This is my introduction to the world of Sturmey-Archer 3-speed hubs. This bike insists on being ridden at a leisurely pace. I love its smooth ride and making long swooping turns on it. I tried riding it to work a few times but given the fact that I’m usually running late and sprinting it just isn’t suited to the task. The rear hub has a dynamo generator to power the front and rear lights. I need to do some tinkering to get that working. I’m also going to install a Pletcher type rack.

This is an abandoned  ’80s era Sekine 10-speed that I found lying by the road near work. I spotted it late in the Fall of 2010 and passed by without examining it. About a month later, after we had already had a snowfall or two I went back and it was still there, handlebars sticking forlornly out of the snow. There were a couple of guys in the parking lot of the business it was in front of and I asked them about it. Nobody at their shop owned it. So, I pulled out of the snow and carried it back to work. I have since tried to find the owner but without success.

It has been well taken care of, and needs little work. I had thought it would be perfect for my wife but it turns out to be too big. At this time, I am considering giving it a sympathetic and reversible conversion to fixed gear.

6 thoughts on “My Bikes”